Interviewing the project for the job 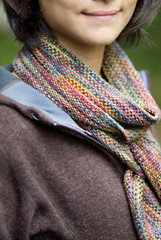 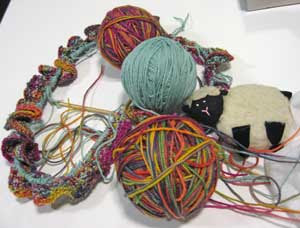 If you are like me, one of the most important parts of getting ready for a vacation/trip is to have the right project with you. Who knows...you may get stuck somewhere for a period of time longer than anticipated and that is precious crocheting/knitting time. When I travel in a car it is always easy to pack; I take many of the things that are in my que. Flying, that is a whole different story. When you fly you have to narrow down how many things you take with you. Flying internationally, it gets even worse. You narrow it down to one, or at least I do because I travel light...I hate to carry things when I get on the plane. Peter and I went to see Kelsey at the beginning of October and I spent much of September deliberating my que. I promised Kelsey a Knitting Pure and Simple, Neckdown pullover made out of Malabrigo yarn in the Paris Nights colorway and it seemed like I should work on that...but I hadn't swatched and I was worried about needle sizing. I wound yarn for the Plymouth Mushishi shawl #2141 and thought I was going to take that but then....the morning I was leaving I looked at the Koigu Kppm colors and thought of the Churchmouse Classics Linen scarf. I thought about the simplicity of carrying the yarn, and the tremendous amount of knitting that would go with it and that project won. I am so happy with my decision. I am still not done with it but I love the way it looks.

I do beleive that international security is tighter now than it was 2 years ago. In Geneva they had a picture of things that were not allowed to be in your carry on luggage. Two of the items I focused on were very tiny scissors, which in the past have not been an issue and straight metal knitting needles. I decided to ditch my scissors but I took a chance on the circular bamboo needles that my scarf was on...I couldn't give up all that knitting time! Risk was on my side and I was able to knit the whole way back. So. word of warning to traveling international crafters. You might get your project there but you might have to pack it in on the way back...take a book just in case!