:River Colors Journal: Knit in Public Day (from the eyes of a child) - Knitting Tips Blog

Knit in Public Day (from the eyes of a child)
Well, actually that headline is a tad deceiving.  The person (Kelsey)  who wrote this post is now a mature wonderful adult.   But you see, when I  first started River Colors, she was a child and has grown up with the studio and Knit in Public Day in her life.  I asked her to write this posting because I thought it would be fun to see what she said.   Little did I know that when I reviewed it I would be in tears and say...."wow she gets it". Of course, I am biased so you can decide for yourself.
Erika


As I sat down to write this post, Orlando’s most recent tragedy and the tumultuous state of the world came to mind. Even though, my initial brainstorming had led me to a much more lighthearted funny spin on the fast approach of World Wide Knit in Public Day, when I sat down to write, reflection seemed to spill from the keyboard. And thus my title: WWKD….What Would a Knitter Do?
When I was younger, my siblings and I always thought it was so funny that no matter where she was, my mother ran into a fellow knitter. We used to make fun of her for knowing everyone. It wasn’t until a few years ago, when I was older and wiser, did I realize that River Colors had become a community and when my mother ran into fellow knitters, they shared something more than a passing hello. I should have known this far earlier, as I had watched the effort my mother put in to things, whether it was a garment to share with others, making sure to stay and hang out with the Thursday night knit circle, or the excitement that accompanied World Wide Knit in Public Day.
I remember one of the years I first attended World Wide Knit in Public Day. I didn’t quite know what to expect. I remember thinking it was very hot, and when I arrived, I bore witness to a group of individuals knitting away on the asphalt parking lot. I’m sure I didn’t get it then, but in the years since, I have tried to be present on World Wide Knit in Public Day to help, whether it was putting up tents in the sun, or making sure they didn’t blow away in the wind, I even made the food last year (so if you enjoyed it, yep I’m that famous chef you’ve been searching for since!). I did these things because it meant something to my mom, and to the community of River Colors, because after hanging around the store enough, you start to understand it’s not just about a needle and yarn, it’s about everything in between. World Wide Knit in Public Day isn’t a day to knit socks in the heat of summer, it is a day for knitters to unify and celebrate the craft that has created a community for individuals all over the world.
When I titled this piece WWKD, it was not in a joking matter, it was that despite other identities, you all identify as knitters. And, in reflection of the events in Orlando, and violence and hatred that divides our world, maybe this year we can see World Wide Knit in Public Day, as day unification, under craft and kindness. 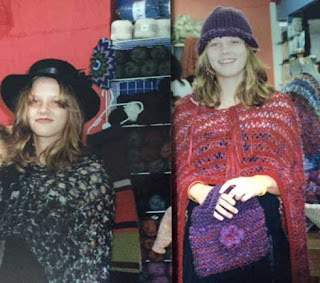 I don't have any pictures of Kelsey at Knit In Public Day.....but I do have these from a long time ago. She was a good sport and modeled for a fashion show we had at the studio. Thanks for sharing Kelsey.