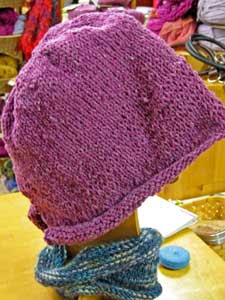 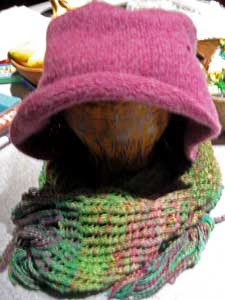 In my mind, part of startitis is the beleif that you can start and finish a project within a very short time. Of course though, this time does not include the luxury of mistakes. I have an example here. I adore the 1920's Ribbon Hat by Leigh Radford. This hat is felted and uses the Imperial Yarn Columbia 2 ply. I decided that was going to be the first project I launched into. Finish it I did(as you can see by my pictures). The hat before felting, and the hat after. What I did not really think about before I started was the fact that I have a new fancy washing machine....So by all accounts I can tell you I have started and finished this hat and it is as cute as it looks. The problem however; as a shopowner with a high code of ethics, is that I have to tell you that my head is too small for the finished project. This is a polite way of saying this project after felting is still waaaaay too big, which of course you could never tell by my picture. I am confessing and telling you I am going to take another shot at the project with a different yarn that I know felts well...like Malabrigo worsted. I am also going to knit up a swatch of the leftover yarn and see if it will felt better if I knit it looser, though honestly that does not seem to make sense with the printed gauge. Stay tuned as I try to problem solve the final product(by the way, I looked it up on Ravelry and I saw at least one person where the hat turned out way too small).....sigh, the art of felting projects.

sharecropper
I have found that looser knit items do felt better most of the time. And, some yarns do felt better for me than others. I know that Lambs Pride will felt to 60% of original size with the way I do the felting, but Cascade 220 felts only to 70% of original size. Lopi (do they make it any longer?) felts about 50% for me. Good luck with your felting. Sometimes a second go-round and even putting it in the dryer will make something fit for me.http://blog.rivercolors.com/feeds/posts/default?alt=rss
Post a Comment